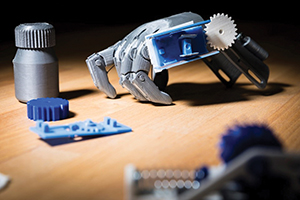 Engineers at the University of Wisconsin have developed 3-D printed gears that are able to track and store information without the use of electronics. The system uses a method called backscatter, through which a device, including a prosthesis, can share information by reflecting signals that are transmitted to it with an antenna.

The system uses 2 antennas that can be contacted by a switch attached to a gear. Movement is captured when the switch contacts one of the two antennas, and the teeth of each gear carry specific messages.

The team also printed an e-NABLE prosthetic hand with a prototype of their bidirectional sensor that monitors the hand opening and closing by determining the angle of the wrist.

“This system will give us a higher-fidelity picture of what is going on,” said co-author Jennifer Mankoff, PhD, a professor in the School of Computer Science & Engineering. “Ultimately what I’d like to do with these data is predict whether or not people are going to abandon a device based on how they’re using it.”

The next step in the research is to reduce the size for more real-world testing, Mankoff said.

Read Next- How To Repair a WordPress site

Are You Relying Too Much On Your Intact Limbs?