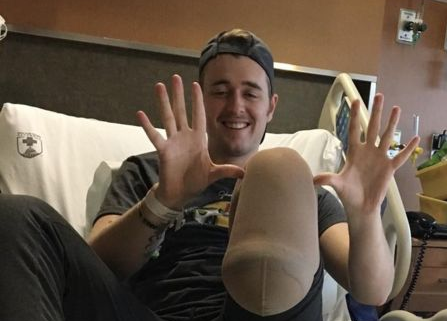 A US Navy sailor who has been documenting his recovery online after having his leg amputated has said he is on “top of the world” after taking his first steps using a prosthetic limb. Sean Dougherty filmed the “game-changing” moment for his Instagram followers. Sean wrote: “It’s not much but my first few steps are now out of the way. With a little practice, I’ll be back to my old self in no time.” He told BBC News: “Being able to stand on my own two feet again has made me feel like I’ve regained that part of my life.”

When his leg was amputated below the knee in January, Sean posted his first defiant message on social media, which read: “Just had my leg amputated. Whatever, I didn’t want it anyway.” The message and accompanying photograph received more than 80,000 upvotes on Reddit.

One Reddit user who had just had surgery on a broken leg thanked Sean for encouraging them to “look on the bright side”. He replied: “Don’t be scared. I’m sure you’ll recover but even if you don’t, I will happily be your amputee buddy.” And when someone else said he was handling losing his leg better than they would, he replied: “I lost my leg, not my personality.”

Sean said chats such as these motivated him to post about his recovery as he adjusted to his new life. The third-class petty officer’s leg was crushed in 2017 as he was unloading hazardous materials from his ship. Despite 10 operations to save his leg, he said, the pain caused by the permanent nerve damage was “too much to stomach” and he eventually opted for an amputation.

“My leg… has caused me nothing but pain and agony for over a year,” he said. “Being an amputee isn’t a bad thing. I’m awesome and so is my prosthetic leg.”

To keep people updated on his progress, the 23-year-old posted a video of him putting on his stump for the first time. It included a section of a sentimental tattoo lost during the amputation, which quoted a saying his mother used when he was young. “The fact that I was able to keep this tattoo means so much to me,” he said.

As part of his recuperation, Sean underwent a form of therapy called mirror visual feedback, which involves using a mirror to reflect the remaining limb, creating the impression of having both legs.Exercising or moving the remaining limb can help remove pain from a phantom limb, according to the NHS. “Seeing my left leg magically come back was incredible but too much to handle,” Sean said.

Sean suffered a setback in March when he had to return to hospital because of an infection, which ultimately resulted in further surgery. The impact left him feeling like he was going downhill mentally. “My positivity started to run out and I had to admit I was depressed,” he said. “I let myself be sad for about a week and now I feel a lot better.”

In recent weeks, both physiotherapy and counselling helped him get back on track. Throughout his battle to stand on two feet again Sean has received support from his online following, which he said had made all the difference in the world. “I’ve actually met some of the people I’ve been talking to online and they’ve given me advice.,” he said. “They have kept me going and my faith has been restored in humanity.”

Sean’s next goal is to run a mile in August. Ultimately, he wants to complete his navy contract then go to college to “experience the world, meet new people, and enjoy life”. His advice to anyone who wants to know what having a leg amputated feels like, is simple: “If you’ve ever lost a family member, you know what it’s like to lose a leg. There are ups and downs and how you look at them depends on your perspective.”

Neuroprosthetic Limbs: The Future Of Prosthetics
Scroll to top