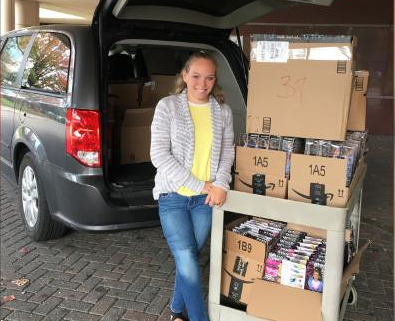 A New York teenager who was born missing a leg is doing her part for the children in her community that are going through a similar experience.

Chloe Newman was born without her right leg, due to a rare condition known as Amniotic Band Syndrome. As a lifelong prosthetic user, the 18-year-old knows firsthand how isolating the experience can be for kids. For that reason, she has donated more than 400 Barbie dolls with prosthetic legs to Shriners Hospitals for Children in Springfield, Massachusetts.

She herself received treatment for years at the Massachusetts hospital. Every year she receives a new prosthetic leg from Shriners where she has been treated since she was adopted as a baby from Kazakhstan. She says she wanted to give the hospital’s current patients something that would help them feel less alone.

“I think the patients would feel better about themselves,” she told NBC affiliate WWLP. “That they would see, ‘Oh, that’s really cool! They are making a Barbie like me, so why should I be ashamed of myself if there’s now toys like me?’”

Newman said that after Chloe decided she wanted to donate the dolls to Shriners patients, she headed to the local Walmart, but only found four of the Barbie Fashionista #121 dolls. At that point, Newman took to Facebook to solicit donations from friends and family, hoping they could reach 100, as that’s how many patients were receiving prosthetic limbs at Shriners.

“If you’re out shopping, if you see four or five dolls, get them and I’ll reimburse you,” the post reportedly read. The mother-daughter team hit their goal within 24 hours but kept receiving dolls.

The donations ended up totaling more than 400 prosthetic Barbie dolls. With so many dolls available. the hospital is sharing them with children at other Shriners’ facilities. According to a press release, the dolls will act as tools in therapeutic education and medical play for kids facing amputation. Word of Newman’s campaign eventually made its way to Mattel, and the company donated 200 of its Barbie Fashionista 121 dolls as well.

Mattel introduced the Fashionistas line in February — which included not only a Barbie with a prosthetic limbs, but a doll in a wheelchair — to reflect differently abled bodies, Good Morning America reported.

“For 60 years, Barbie has been a reflection of culture and fashion and that is key to the brand’s continued relevance,” Kim Culmone, Global Head of Design for Barbie, told GMA. “As we design Barbie for the next generation, we are focused on evolving to remain the most diverse doll line in the marketplace. A wheelchair or doll in a wheelchair was one of the most requested items through our consumer hotline, and It’s important to us to listen to our consumers.”

Bionic Leg Being Developed Could Change Lives
Scroll to top